In the December of 1985 I was taken on a Christmas outing with my local cub scouts and had a life changing experience.

As a seven year old it was not my first time at the cinema - Basildon’s old ABC had been the venue when my Dad took me to see Return of the Jedi in 1983 - but to my knowledge, this is the first time I had been without the security of the parental units.

I remember it clearly. The plush seats; the red velvet curtains; the Pearl and Dean theme tune and how incredibly unsuitable a warm cubs jersey was in a hot, packed cinema. I even bought my own pack of Poppets (chocolate raisin ones) at the refreshment stand and everything. Totally grown up. I remember the really cool car, the blinding flashes as it went back in time, the sharp suits, the glamorous 50’s girls and of course the magnificent guitar solo. Johnny? He be gooood.

Everybody on my street wanted to be Marty Mcfly. Everybody. They wanted to be that cool, that charismatic. Except only one person could really actually BE him. And that somebody was me. After all I had the holy trinity of skateboard, denim jacket and Walkman - it was only right and proper that I assume the role and be the ambassador to carry the flame forward. I skated round that estate listening to Huey Lewis and dreamed of the day that I too would be able to visit Hill Valley - which is of course, a nice place to live.

I bought the DVD’s and played them till I’d learned the script inside out and back to front. I bought the merch - everything from annuals to posters to clothing - even my own little Lego Delorean. In between all that, I almost wet my pants when we visited Universal studios in Florida and I got to ride the ride with Doc and Marty and Einy and oh - it was magical. I was (as they say) a bit of a fan.

But it was nostalgia. A film from my childhood. Ironically BTTF was always a thing in my past but never sadly, my future.

And then they made a musical.

And then they decided to launch it not in LA or New York or London, but in Manchester, fifteen miles from my house.

Six days before my birthday.

Someone was definitely reaching out to me.

My partner (who is awesome and has completely ruined the chances of me winning Christmas present Top Trumps ever again) got us front row tickets and off we went to be with the dedicated folks of Nerdville for the world premiere at Manchester’s grand old Opera House.

With me dressed as Marty and her as Jennifer we arrived crazily early for the show (a full ninety minutes early) but already there was a buzz in the air and an expectant mob at the theatre. The Comic-Con brigade were out in full force today. Clone Martys were everywhere you looked, the genius writer Bob Gale was out front for autographs (thanks Bob for signing my ticket and pushing up our home insurance premium) and the merch stall had taken the shows budget in takings within about three minutes of opening. The anticipation of ‘the community’ was almost too much to bear - and this was before we had even set foot in the theatre itself.

When we did - the production team did not disappoint. The preshow was a pulsing digital projection - suitably sci-fi yet somehow delivering 80’s kitsch. Neon and laser living in perfect harmony while the theatre pumped out so many hits of that great decade you’d almost expect Gary Davies himself to pop up and claim he was DJ’ing for the night.

As the lights dimmed - the 15 strong mini orchestra (they were listed in the programme as a band, but my word they played like an orchestra) began Alan Silvestri’s iconic overture and I was gone. Taken back into a world of inventors, adventure, dreams, music and the ever growing complexities of... sorry... the power of - love.

In a recent interview with the BBC Bob Gale himself promised that if you went to the theatre wanting to see the film Back to the Future on stage, that is exactly what you would get and of course, it did not disappoint.

Sure - there are a few things that have needed to be updated through practicality or the changing of how we view the world in the intervening 35 years since the original. There are for example two less terrorists in this particular version of the story (we tend not to do ‘comedy terrorists’ so

much nowadays) and a layer of self reflection about the USA in the fifties that was perhaps missing at the height of Reaganism back in good old 1985.

The rose-tinted view of gas guzzling, asbestos filled, tobacco promoting fifties America (when it was ‘great’ I heard) is brought into question within five show numbers taking the story to another level entirely. The breathing space of a theatre stage gives this until now 2D experience a chance to breathe, providing the audience with an even greater connection with the characters.

People such as Goldie Wilson get the chance to shine in his bid to be Mayor, siblings Dave and Linda are explored in greater depth and indeed a whole musical number ‘Hello, is anybody home?’ is dedicated to the relentless futility of being a member of the Mcfly clan in 1985. Middle America gets its time under the spotlight and we see George and Lorraine‘s family in an entirely new way. These are people trampled on the wheel of normality - not held back by themselves - but by the lack of ambition their teenage iterations were originally served.

And already we have a new ingredient to this rebooted time travelling cake.

Sci-fi adventure classics are exciting, they are mind-blowing, they are fun. They are rarely poignant. Back to the future - the musical manages to mix all of the above (indeed it is fiercely cinematic for large proportions of the show) yet is sprayed with a layer of real character driven reflection.

When George is callously bullied by Biff right in front of our eyes it is prolonged and we really do feel it; when Lorraine sings about exactly why she’s looking for a man who will take her out of all this we absolutely believe in her motives and when Doc looks to the stars and sings ‘For the dreamers’ - well we have to get the tissues out to wipe our eyes. This is not just an adaptation of a film. It’s a truly great piece of musical theatre.

What is particularly special about this though is that it delivers on those new genre commitments too. Camp and self referential throughout, it has a big enough helping of cheese that it would clog your arteries within minutes - but that of course only adds to the fun. The routines (often led by a Doc Brown with a whole new lease of life in his dancing shoes) are crisp and fantastically choreographed by Chris Bailey while the music is (as you would expect) wonderfully scored by Alan Silvestri. Joined by songwriter Glen Ballard for the production he - along with Bob Gale producing the book— have delivered some new, fresh and timeless (ha!) classics.

Yes, it is of course hard for me to give any kind of subjective viewpoint of the show - I am the number one fan after all (undisputed on my block for 35 years) and any small breadcrumb of BTTF will always get me gushing. I am also a theatre luvvie though and what I saw last night was something very exciting and ground breaking too.

This was a film adaptation that was entirely different yet somehow wonderfully the same. For example, take the performances of Hugh Coles and Aidan Cutler as George and Biff respectively. These were both textbook lessons in film mimicry, as well as being a platform for the two men to birth these newer, richer versions of our lifelong friends. Mannerisms from the film were copied and replicated with precision but then delivered back to us with a razzmatazz that any self respecting show buff would have to throw their applause at. This crowd have heard these lines before - making the expectation almost pantomime like at times. The actors took this and ran with it - delivering a thousand audience smiles in the process.

The introduction of the whole stage musical element makes Doc somehow younger, Marty a little more world weary and the other residents of Hill Valley? Well they are given a voice - a beautiful choral voice that gets you deep down inside. Sprinkle over all of that a large dose of Hollywood standard special effects (I’ll spoil nothing, there are plenty of explosive ‘wow’ moments for you to enjoy) and you’ll get an idea of just how moved I was by this piece.

Yes, this was the first night and there were a couple of glitches with either set or lighting or a combination of both from time to time but as a theatre practitioner you would fully expect that a show of this magnitude would have a tiny glitch list on day one. We had a couple of tech issues in our performance but they were minimal and should not detract from what is to become I’m sure a hit around the globe. The kinks (they’re moving Deloreans around a theatre and sending people flying through the space time-continuum at eighty eight miles per hour for pities sake) will be ironed out in time. As Doc says - “You can accomplish anything if you put your mind to it”

As I lay here the following morning with my show t-shirt on, new fridge magnet by my side and an autographed theatre ticket from Bob Gale sitting in my Back to the Future shrine in the living room, I am still riding high on the energy of the emotions felt in the theatre last night. I am still standing with a crowd of worshippers giving an ovation to this latest chapter in time travelling genius. I am still back in Hill Valley and lapping it all up. I am an excited seven year old boy all over again.

I can’t wait for Bob to start writing the musical version of Part 2. 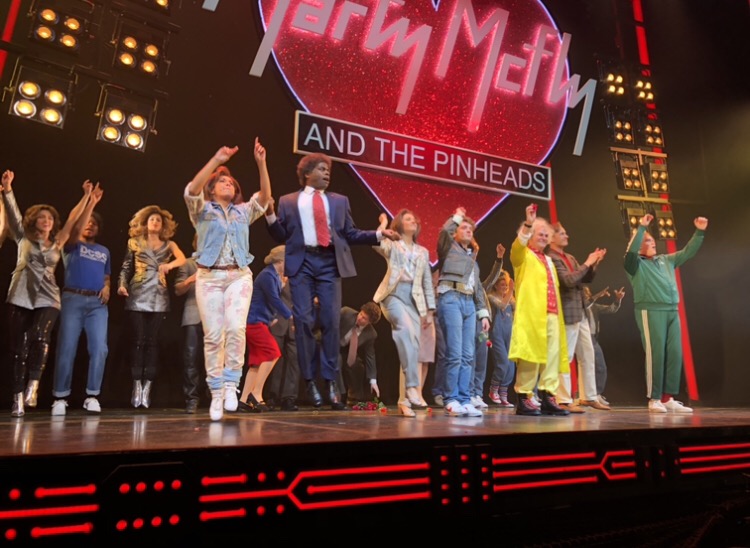